Blow away the cobwebs along blustery seaside paths or take a frost covered Boxing Day stroll though wild moorland and rolling countryside.

The North Yorkshire Coast is blessed with a spectacle of stunning walks and that is never truer than during the winter months.

When the cold weather rolls in, it’s the perfect time to wrap up warm, throw on your wellies and head out on an invigorating stroll and there are lots of different routes to suit everyone from our doorsteps.

So why not get out and explore the seasons winter wonderland, capture stunning scenery and then return to your cosy home-from-home hideaway to warm those chills as you recharge around the crackling fire.

If you’re looking for some inspiration, here’s 3 of our favourite winter walks across the North Yorkshire Coast and Moors.

An ascent of the Yorkshire Matterhorn, plus a reminder or two of the great navigator and explorer Captain Cook – just some of the delights of this classic seven-mile circular walk through dappled woodlands and across heather moorland.

The climb up Roseberry Topping (1,050 feet/320 metres) is a steep ascent up a stepped path and stone track – there’s also a gentler ascent from Gribdale Gate to Cook’s Monument. Otherwise the going is straightforward, along well-defined moorland tracks and grass and woodland paths.

During his early years, the young James Cook must have spent many hours walking in this area. Tantalising glimpses of the North Sea from the Topping doubtless set something racing in his heart, and within a few years Cook had started a journey that would take him around the world on his famous voyages of exploration. His initial steps, however, were closer to home – first to Staithes (where he was apprenticed to a local shopkeeper) and then to Whitby. Follow the trail, finding out about his schooldays in Great Ayton at the Captain Cook Schoolroom Museum, before visiting the Captain Cook and Staithes Heritage Centre and then Whitby’s Captain Cook Memorial Museum, the latter housed in the building where apprentice seaman Cook first lodged.

Roseberry Topping is an unusual landmark on the otherwise fairly level skyline of the North York Moors. A hard sandstone cap has protected the underlying soft shales and clays, so while the surrounding area was worn away by ice, wind and rain, the Topping survived. Its dramatically shaped summit – seemingly cut away on one side – has another explanation, at least in part. Alum, jet and ironstone have all been quarried and mined out of the hill over the centuries, and ironstone mine workings led to the collapse of the western face in 1912.

Parts of Newton Wood, on the slopes of Roseberry Topping, have existed for at least 400 years. Indeed, woods like this once covered much of the North York Moors. It’s broadleaved woodland, with sessile oaks, rowan, ash, alder and sycamore present – most of the oak trees are of similar size and were probably planted in the 1800s. Unsurprisingly, it’s one of the richest woods in the area for birdlife, featuring great spotted woodpeckers, blue tits, woodcock, wood warblers and flycatchers. 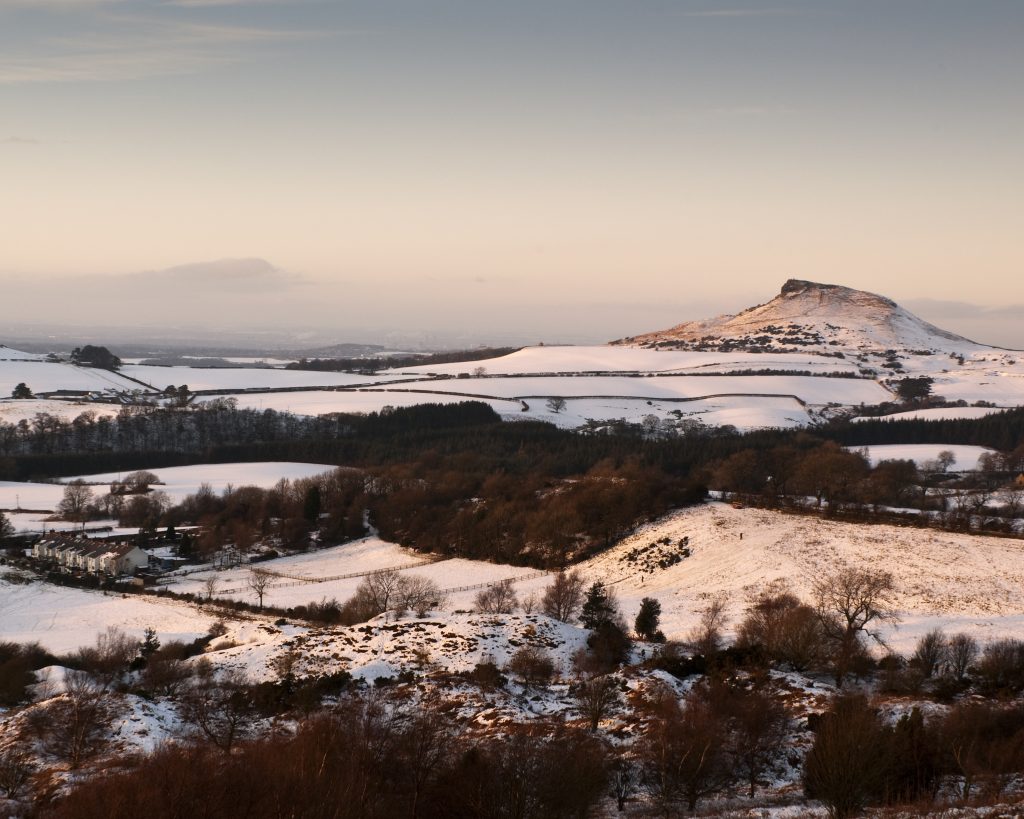 Oliver’s Mount and the Mere

Overlooking the southern part of Scarborough is Oliver’s Mount, which is 500 feet above sea level and from which you can obtain a breath-taking view of Scarborough. It has an impressive War Memorial, the column rising to 75½ feet. The former name of the hill was Weaponness and its present name may be derived from the mistaken belief that Oliver Cromwell placed batteries on it during the siege of the Castle. To reach Oliver’s Mount, leave the railway station on A165 road to Cayton and Filey, cross the long and impressive Valley Bridge, which is about 70 feet above the beautiful Valley Park and continue up Ramshill Road past the traffic lights, turning to the right at Mountside.

Hole of Horcum and Levisham Moor

Be prepared for grand landscapes and big views on this North York Moors classic. Starting with the dramatic panorama from Saltergate over the Hole of Horcum, the five-mile scenic walk follows a prominent track over Levisham Moor, past important archaeological remains. There’s a possible diversion to the stunning viewpoint of Skelton Tower, after which the route drops into the rocky ravine of Dundale Griff and returns along the valley to the Hole of Horcum, climbing back out at Saltergate.

The Hole of Horcum is one of the most spectacular features in the National Park: a huge natural amphitheatre 400 feet deep and more than half a mile across. Legends hang easily upon a place known as the Devil’s Punchbowl – the best-known says that it was formed when Wade the Giant scooped up a handful of earth to throw at his wife during an argument.

The track across Levisham Moor runs through a landscape rich in archaeological remains. Half-hidden in the heather are traces of human occupation stretching back thousands of years, from Bronze Age barrows to late Iron Age boundary dykes. These mounds, ditches, banks and ridges are evidence of burial sites, fortified farmsteads, enclosures and field systems – hard to spot at first glance but obvious once identified.

Ruined Skelton Tower offers an extraordinary view down into Newtondale and over the track of the North Yorkshire Moors Railway. Built around 1830 by Robert Skelton, rector of Levisham, it was once used as overnight lodgings after a day’s shooting on the moors. The grassy headland is a wonderful spot for a picnic, and you’ll hear the whistle of the steam trains below in plenty of time for a photograph.

Where better to see out the colder months than from the warm comfort of a cottage with a roaring fire or a homely farmstead that imbues slow living. Luckily, our portfolio has both of these in abundance and you can take advantage of 15% OFF last-minute holidays! So you’ll save a few extra pennies to spend on yourself this Christmas. Discover our full collection of cosy cottages and enjoy winter walks across the North Yorkshire Moors and Coast.